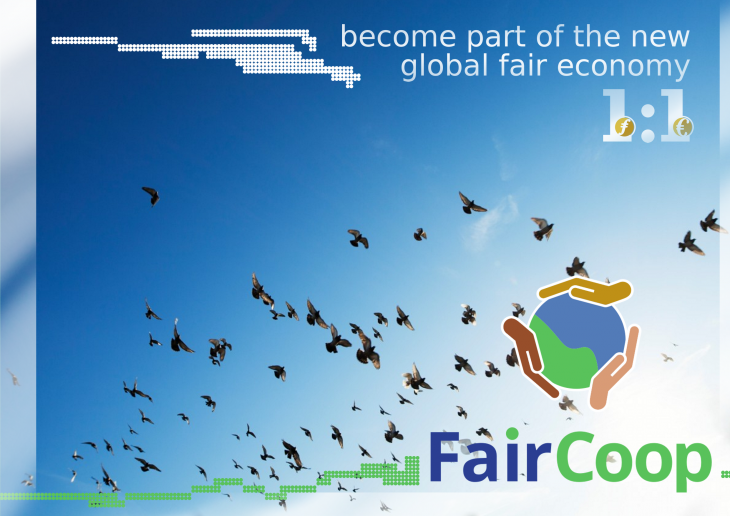 The Post-capitalist movement known as FairCoop steadily grows stronger, worldwide, in an integrated way. Independently from the decisions of centralized institutions, statements of hierarchical organizations, fluctuations of market speculation and mainstream skepticism, we are empowering ourselves in an exponential and radiant way.

Three years of intense cooperative activism have made economic and social emancipation tools a reality, to the point where anyone with Internet access can become autonomous in their local environment, regardless of the culture, political situation, economic pressures or legal impositions, and become part of the new global fair economy.

For three years with FairCoop, a group of cooperative activists have spent their energy to build an innovative set of tools and solutions to help people to have an actual, practical alternative choice: for instance, they are creating a novel, independent and fair economy with the help of a unique anti-speculative crypto-currency: FairCoin. In this way, Faircoop and its structures are creating the tools in order to slowly leave the control of the state and capital, offering a realistic transition plan instead of relying simply on empty rhetoric or intellectual abstractions. It is a constructive project and serves an important role, as the real task for radicalism today is to help people, collectives and regions to realize that they don't need state bureaucracies, political parties or impersonal economic institutions.

Understanding that we are faced with not just a passing financial crisis but a systemic disintegration, we realized that the truly unrealistic and utopian dream was that of endless capitalist accumulation, as the established powers insist on going headlong over a cliff, stubbornly insisting on growing inequality and endless consumption of finite resources. Whereas for us, it was clear to see that the realistic proposal was integral, eco-friendly, grassroots self-management of our own economic life. In other words, we had to become functionally autonomous from the current economic system to give following generations a livable environment and a functioning society. We stopped simply complaining about an obviously harmful system, and started giving our energy to the construction of an alternative according to our values.