FairCoin 2: Revision of one of the most promising cryptocurrencies 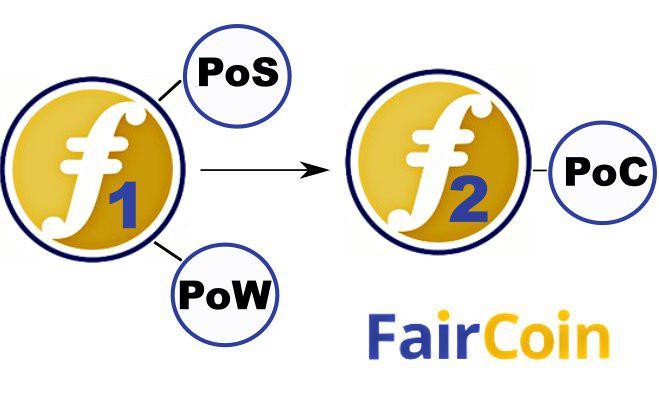 On July 18th, 2017 -at 18:07 CET-, all coins created with FairCoin 1 were transferred from the old blockchain to a brand new one. One year later, FairCoin 2 blockchain has run stable on Proof-of-Cooperation.  173,823 blocks have been created and 17,300 transactions have been made with this innovative technology, which is not only performing better than Bitcoin and most altcoins; it also requires less energy to enable fast and secure transactions and applies and redistributes a very low commission in order to ensure smooth and secure operations. It has been built with a clear value in mind: to overcome regional and global economic differences, allowing trade exchanges and commercial transactions within the frame of a fair economy.

Let's take a walk through its evolution.

Bitcoin: the coming of decentralized money

The first blockchain software was created in 2009: an open source protocol called Bitcoin was released. By simply copying the code, adapting a few lines and distributing coins under various names, many other altcoins (alternative coins to Bitcoin) were created. This opened a door that really allowed hacking into the financial world - basically under the control of the same few people who were part of the cryptoworld.

Cryptocurrencies allow the creation and storage of value beyond the control of any Government or Central Bank. In a decentralized and incorruptible environment such as that provided by the blockchain, no Government issues or backs coins, nor can it control their value. These aspects are, instead, in the hands of the community behind a particular cryptocurrency. So we decided that this was the kind of money we needed to run a new global economic system.

The first FairCoin were created by an anonymous developer who pre-mined 50 million units and distributed them for free to people who requested them on a website. This creator subsequently abandoned the project and FairCoop "appropriated" it, deciding to use this currency as a means of payment for its new ecosystem and taking over 10 million FairCoin.

In the field of decentralized money, there was also the possibility of choosing between two types of crypto currencies, depending on the system they operated under. Ours was one of the most environmentally friendly options at the time.

When we decided to use FairCoin for our new economic project, all the cryptocurrencies worked under two different algorithms:

- Proof of Work (PoW): the rewards are received mainly by those who have the greatest computing capacity to solve the algorithms needed to create new blocks (validation of transactions or issuance of new coins). This was called "mining" and, as can be deduced, gives an advantage to those people with more solvency to have large equipments.

- Proof of Stake (PoS): The resolution of an algorithm rewards people who have savings. This was called "minting" and, although it still gives an advantage to those who have more coins, it does not encourage competition for being the first one to solve the mathematical problem, so there is no need to have many computers running all day. Conclusion: this system doesn't need as many resources as the PoW.

FairCoin 1 was a hybrid between PoW and PoS systems. In this first version, a few more coins were created, but we wanted to go further, so we decided on a different innovation from the typical mining and minting process followed by Bitcoin and other altcoins.

Having a decentralized cryptocurency and being one of the most ecological, we began to implement a unique consensus algorithm developed for FairCoin: our innovative Proof of Cooperation (PoC), which leads us to the current FairCoin 2. From that point on, the FairCoop general assembly decided that no more coins would be issued. The blockchain would then only need a few CVNs (validation nodes) to create blocks and validate transactions. The result was a currency with the following characteristics:

FairCoin2 requires much less energy than other cryptocurrencies, while guaranteeing faster transactions. With the Proof of Cooperation, energy-intensive mining processes are no longer required. The blockchain only needs 20-30 normal or small computers to operate.

At the moment, the energy consumption in the FairCoin blockchain is negligible. A total of 20-30 CVNs make it possible to operate it (validate transactions quickly and effectively), consuming only about 300 watts per year in total, less than what a 4-person household consumes during the same period. This is not much compared to the Bitcoin average of ~300 Megawatts needed by mining ASICs that elaborate complex hash algorithms for each transaction.

Therefore, we can say that FairCoin is now the most ecological and resistant cryptocurrency.

2.  It is run by a cooperative system:

Instead of competing to solve a difficult puzzle in order to validate blocks, CVNs cooperate under a round-robin system. PoC does not favour the richest people, such as PoW and PoS. There is a very small tansaction fee to avoid spam. The CVNs collect this fee to cover part of the costs of electricity and Internet connection. The people who keep the blockchain running do so for the common good and not for personal gain. New CVN opertors have to introduce themselves in the FairCoop General Assembly and are approved there cooperatively.

In addition to being ecological and cooperative, FairCoin is fundamentally linked to a highly committed community with a very specific common goal. Unlike most cryptocurrencies - which are capitalized by a developing blockchain bubble - FairCoin has a value related to a real productive economy, provided by FairCoop's network of local nodes in numerous countries around the world.

Even if no one has control over a cryptocurrency (or they would no longer be decentralized), our ultimate goal is for FairCoin to be used primarily within the FairCoop ecosystem by people who support its values in the search for a fairer socio-economic system. In this sense, it is worth saying that only about 10% of all FairCoin are in the free markets - that is, they can be in the hands of people not directly related to FairCoop.

This implies that the value given to FairCoin is largely in the hands of the community that supports it, which, through decisions of the general assembly, is responsible for ensuring its stability by providing a fixed exchange rate, not subject to the fluctuations of the free markets.

A currency for real use

There are already numerous places where you can buy products and contract daily services with FairCoin, as you can see in our directory and in our online marketplace. We believe that the growing acceptance of this cryptocurrency as a means of payment will be an important achievement for building independent and self-managed lives for all people and communities who want to join our movement. Dozens of cooperatives, online platforms, bars, restaurants, simple merchants and service providers accept and use FairCoin worldwide.

Our tool for a fair economic circle

FairCoin is intended to be the central tool on which to build a fair and self-managed economic circle. Because it is primarily an active community of people with common goals behind FairCoin, we do not need to worry so much about the speculative market mentioned above, but we need to concentrate our efforts on creating a real circular economy that can provide us with the basics we may need, outside the control of fiat money. We hope that we can complement many other local and social currencies (by providing them with a broader scope than they encompass, outside of capitalism) to address this desired step towards a post-capitalist system.

No one is saying this is going to be easy, but we think it is worth the effort.