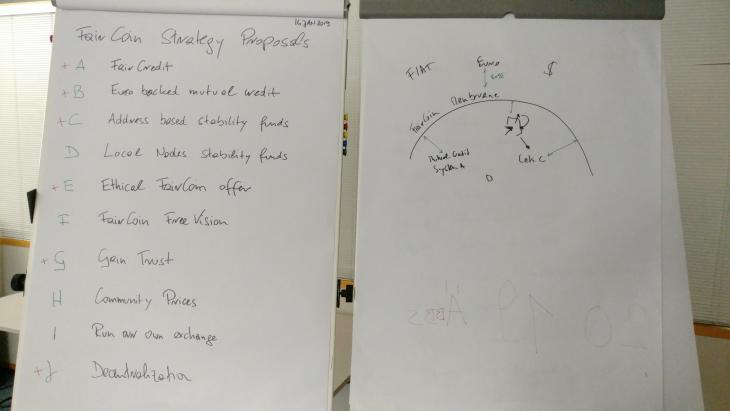 The FairCoin strategy meeting reviewed and discussed ten strategy proposals. Eight people from the FairCoop community attended on January 16th 2019 face to face and virtually. We started with some statistics: around 60 full nodes carry the FairCoin blockchain with an average of 30 transactions per day in early 2019. Coin exchange volume is very low, even if there are almost constantly more than 2 BTC in buy orders. So most transactions are happening within the ecosystem of ethical cooperatives and not at exchanges for speculation purposes.

We first took a closer look at the functions of FairCoin. A mutual credit system may help us to release FairCoin from a medium of exchange to storage and investing in the ecosystem. Proposal A about FairCredit should integrate the idea of easy bootstrapping (without the need to buy FairCoins somewhere) and proposal B, which is about a fall back mechanism, if the bond is not paid (fallback in FairCoin, which could be converted to Euro). Chris will forward  this topic to the group working on Mutual Credit / Coopshares.

Proposals C and D were about gaining stability. We had consensus in the meeting, that we could easily regulate the coin supply, if we simply all lock FairCoins, which we do not intend to use for some period. Exceptions can be made for investments. Examples need to be worked out, but it seems to be quite easy to implement. People who are interested to work on this should write their name here.

We agreed that several measures should be taken or continued to gain trust (proposal G).

Implementation will be continued in the FairCoop Common Management group.

The FairCoin FreeVision proposal F is about offering slots for change back to FIAT. This activity will be followed up by a group of four people with TonyFord in gitlab.

We also had a deeper look at the decentralisation proposal J, which could be allowed on several levels. FairCoin is being used by several communities, which have different requirements. They should be able to define their own set of rules and communication paths.

It is now up to the working groups, to go into deeper details and implement the proposals marked with a +. Anybody who is interested please PM one of the attendants or add your nickname in the detailled meeting minutes here.

About communication, we will change the FairCoin domain to faircoin.world (no hyphen is better for search engines and we are expressing more a global community). We are looking for people who help with blog and social media - we need more stories of usage.

The result of the strategy meeting has been presented the next day at the FairCoop 41st assembly. There was a lot of applause and no objections to implement the highlighted proposals.