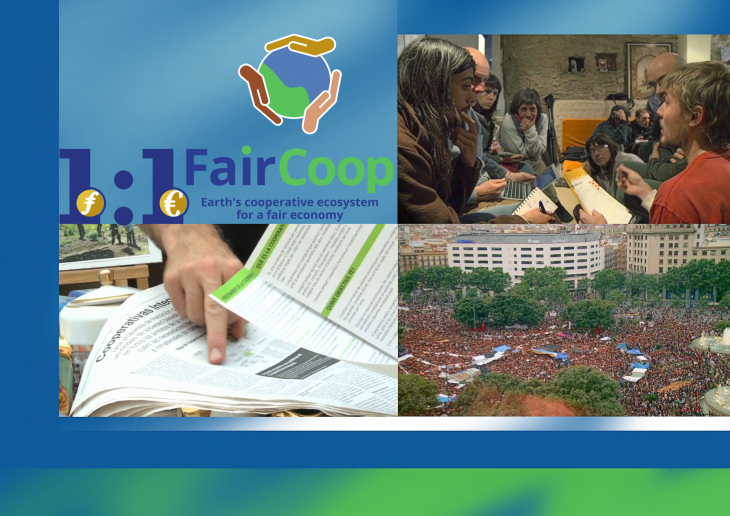 The embodiment of the first integral cooperative was in Catalonia (CIC) back in 2010, when we were just a little group of activists, but firmly convinced of being absolutely capable of self-organizing our entire life,  just by cooperating as peers in a direct, non-hierarchical democracy.  This small experiment soon kickstarted a larger movement and inspired thousands of people to believe in the "integral revolution" as the path to co-create the world we dream of.

Learning from previous experiences around the world towards greater sustainability, self-management, permaculture and alternative autonomous currency systems, the integral cooperative model was developed.

Progressively, we realized we could cut off our dependency on big corporations, the banking system and the unjust laws of the State.

New technologies made possible the creation of independent networks that connected distant communities, on the one hand, and supplied tools to self-manage an autonomous and decentralized economic system on the other. Social currency was the main one (LETS), along with free knowledge repositories and means for collective creation of the commons.

In 2008 the blockchain revolution arose and Bitcoin emerged. Financial history changed radically. Again it was a little group of activists who, from their CIC experience, the P2P networks and blockchain developers, envisioned how this could provide the next step towards a complete global solution.

In September 2014 FairCoop was born to become what today is a worldwide movement, empowering people in every continent. The adoption of the cryptocurrency FairCoin gave a new extension to the social currency concept and the following creation of what we could see as a masterpiece of work, Proof Of Cooperation, made it just perfect.

The first period were more on developing the tools, consolidating a devoted group of people and establishing the first local nodes (where this theory becomes a physical reality).

The sprouts grew at the same time as the seed was spread. FairMarket started to have more and more products and services offered, available for purchase in FairCoin. More and more people joined Freedom Coop. The communication channels received every day more voices. Exponentially, more people from different parts of the world started getting in contact for creating new local nodes. Thousands of FairPay cards were distributed. Bank of the Commons came to be a reality.

The value of FairCoin rose steadily following the consensus-based decisions at the global assemblies, where macroeconomic aspects are taken into account. The advance to equality with the Euro proves the correctness of the guiding policy of FairCoin, with its motto as 'slow but steady wins the race'.

Over a period of time as the networks grew, the value deliberately rose in a much more controlled manner than other digital coins, all the while serving as a practical lesson for movements everywhere in the potential of new economic tools being grafted onto old cooperative structures, to upgrade and renew radicalism for the 21st century. We just have to look at the statistics to see this, and we need to have trust in ourselves when we put all our minds working together.

This advance to an equal pricing with the euro, this significant episode in FairCoop's history shows the world just how strong and successful self-managed grassroots movements can be when we cooperate for a common goal. As a project for a fair and ethical currency this is a symbolic moment. We begin to be assured of our own potential for practical results, and to see that with open-minded understanding and serious collective collaboration, we can create a better model of society than the millionaire politicians, bureaucrats and managers of today ever could.

And we're just getting started... There's still a lot to be done, but we're up for the challenge.