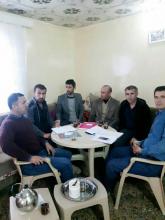 Today we did our first meeting and organized our Local Node of Bashur with 6 members. During the meeting we discussed the mentality of the FairCoop especially. Because to do a work, we have to understand the mentality and concept first of all. It is worth saying that we are not strange to this system. We are a part of this system and struggle for a collective and communal society. Here I will explain some example of our society system in Makhmour, Bashur.
In Makhmour (about 15000 ppl) we organized a society of a collective and communal system. In our society we have 5 main districts and every district has its assembly. The assembly chooses by people of the district and they are 20 and the representative of the people. Also in every district we have more than 20 communes’ and all of them elected by the people. More than 20 families make a commune and every commune has its representative: two member; one is woman and one is man.
on the other hand, we have two general assemblies: The General Assembly of Makhmour and the Ishtar Assembly; it is a women assembly and organizes itself independently. The general Assembly which is called ‘Makhmour Democratic Assembly’ include representatives from 5 main districts. the number is 120 members. So every organization or institution in the mahkmour send its representative to the general Assembly. the system is co-chair: a woman and a man are the coordination of the general Assembly, also the rate of the member is about fifty-fifty men and women.
Every commune holds its meeting monthly and there they discuss all the problems of the commune and there many commissions in commune like; health, education, workers, art, sport, civilization etc.. So they report the result of the meeting to the district’s assembly. Also district assembly send the reports to the general Assembly and the general Assembly holds its meeting every 45 days or two month once.
The most important side of this system also is about economic system. Because here we are trying to build a new system of economy of cooperation and collectivism and we believe in that there is a life outside the state and capitalist system. When we saw the FairCoop we are very happy that we see our economic conception and mentality here with a great international organization with the help of volunteers all around the world.  So today, we discussed the reality and the dreams!
Here in Makhmour we have a good potential of abilities to help the FairCoop and broaden it. Also it is our political and moral responsibility to do it and protect the society, nature and environment against the barbaric capitalist system and its institutions with enforcement of the state. So today we discussed that how can we do that? FairCoop gives the opportunity with very different tools to make progress and develop our economic system in local and global aspects. It is a reality that now we have problems especially in technical. We don’t understand some parts of the cooperation yet. With online help, now we  are trying to get it.
Today we decided to make meeting every week. At a near future, we are going to write down projects of local cooperatives. Now we search and try to understand better. Also we will broaden the local node of Bashur and make new ones. Now our lack is not having women in our local node. It is really worth of self critizing for us. So, we decided to join women and will try hard to achieve it.
In short, next week we will make a clear decision about some projects of cooperative, like fruits, carpets-handmade, art etc..
With best regards
Bashur Local Node

Hi dear friends!
Last night we did our second meeting of Bashur Local Node. During the meeting we discussed about many topics of FairCoop and FairCoin. Especially the mentality background of FairCoop, its development during 3 years, and the reality of being out of state and all its organizations and forces. How can we able to create an alternative economic system which serve just community.
Another topic was, to finish the technical steps of becoming member at ocp and to activate all our members. For this, we help each other and work collective.
In the meeting also we talked about some ideas of cooperatives and the opportunity of how can we achieve it in our local reality. On this topic, we have more than one idea and some of them are; to open a cooperative for handmade clothes, also we can open a cooperative of vegetables. The ideas are not clear yet, but also we are looking for the best and which fits our local reality. Another idea which is ecological and is a serious need here in our country is electricity. So if we can bring and make it ecological; with solar energy and panels. The possibilities are discussed. In the future days it will be clear and we will write the plan and its needs and present to concerned managers of FairCoop.
During last week we activated our local’s email account and now we are at FairMarket. So after activation of our members we will use it better and send products.
On the other hand, one of our friend translated the web page and some posts into Kurdish. It will continue and be better.